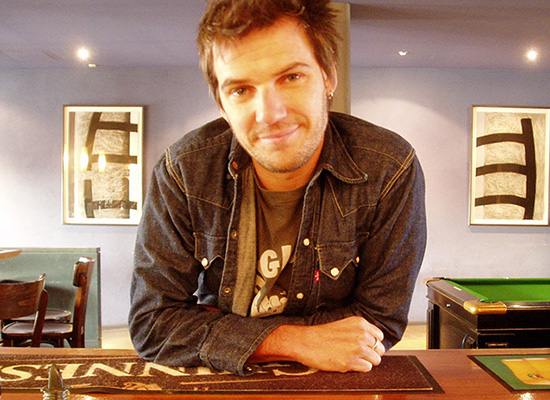 I sat down for a chat with Nick Barker on a Saturday afternoon, over a beer in the west of Melbourne.  He’s very fit for a seasoned musician! I soon find out this is due to surfing and kickboxing with a group of locals, some musicians, around the corner. In his words, he’s been on both sides of the music industry, and in the middle. Starting  in bands (The Wreckery, The Reptiles), then solo projects, co-writing (including being sent to LA at 24 to write for an album) to now revisiting the band dynamic, having formed the Heartache State with fellow songwriter Justin Garner.

We’re at his local bar where he knows the owners – he’s open, warm and passionate about everything.. it feels like we’re in an old neighbourhood, before hipsters and social media.

Do you remember how old you were when you wrote your first song?

About 15, 16. A terrible song about a girl I was in love with. There’s songs I’ve written I don’t even know what they’re about. Everyone asks me what’s a song about that i’ve written and I say “I dunno, you’d have to go and ask me at age…(younger self)!’ If I’m doing an acoustic gig there’s always one song I include that I wrote when I was twenty.

Do you remember what that was about?

Do you have a particular routine when you’re writing?

Just like a normal morning, you know get up, have a coffee. There’ll come a point where you just get a feeling, a feeling you wouldn’t mind having a little play. I get any idea down I come up with, I record it. I never spend more than 5 minutes, just one little bit, and I just leave it.

At some point I’ll come back to it, driving down the coast, or some other time, listen to the memo’s with my headphones on. For instance this song we’re recording next week for the (Heartache State) album, I was going through some old stuff and found voice memo’s that i’d lost – one of them just started playing out of nowhere. I reckon its one of the strongest songs on the album.

I should be more diligent, should be more prolific etc, but having the benefit of knowing other songwriters and asking the.. i’ve written over 200 songs so I must be doing something right.

Working with Justin, do you each bring in ideas or just come up with stuff jamming?

We can, but we don’t very often. What we’ll do is we’ll text each other ideas. Generally it’s him writing an idea and I’ll work on it, write more of the lyrics. That works well.

It all started when I was going to do a solo record. I had all these ideas, didn’t know what to do and I ended up sending them to Justin. (In the past) he’d written an album full of incredible rock songs, but never wrote a song since then. I’m like ‘You’re mad!’  I loved that album, I was jealous! I even ended up recording a couple of the songs for my solo album.

I said ‘How about we do this album, but i’m not doing it unless you write at least a third of the songs.

In other bands were you always the main song writer?

Yeah in the Reptiles. The Wreckery was Hugo (Race). Then everything I’ve made since then.

You’ve co-written songs with a range of artists in the past, including Tim Rogers. How has that been?

I did a few co-writing workshops, the song writing was ok. I always found it a bit odd. There’s a certain amount of luck, it’s always been a bit of a roll of the dice. Tim Rogers and I have never co-written together. Strangely enough there’s this song on the new album he wrote. We were mucking around, going to do this thing called ‘Shithouse’, and I found an old CD in my garage with ‘Shithouse’ written on it – and there’s a really great song on there. I decided to write some words to it. Tim said he would, but he hadn’t. We’ll be recording it next week.

A song I really love, you performed with Tim, The Other House.

(That song) is from the mid 90’s, the last record on Mushroom then we re-recorded in for Liberation Blue.

Mum was an only child and for some reason I got the job of telling my Grandma when Mum died (in a car accident, when Nick was a teenager). (My Grandma) had a real old worldly stoic thing, said ‘Oh at least she didn’t have any pain’ – was her way of dealing with things. And over the years she lost her mind, and thought she had two houses. The ‘Other House’.

How do you know when a song is finished?

Songs can meander along and have six layers. I had a real thing about middle eights for a long time, it sounded to me like song writing 101, and that the old school song should be 3 and a half minutes. You realize a lot can be said for 3 chords.