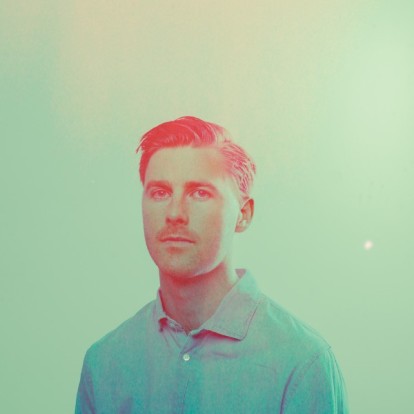 Will Cuming, aka LANKS, is an Australian songwriter and multi-instrumentalist.  His debut album twentyseven is full of sweet, melodic layers and sometimes reflective moods of an artist expecting more from life and himself, as he moves through his late 20’s.  Songs such as ‘Yours’ and ‘Comfortable’ are cruisy and easily accessible, whereas the title track ‘twentyseven’ has an urgent and driving rhythm.  Although this release is a debut, it arrives on the back of three EP’s which have garnered loads of attention, leading to festival requests, a record deal and various collaborations.

Will and I spoke over email, due to his album promotion and tour preparation commitments.  I was keen to hear how he writes his folk/electronic driven songs.

Do you remember the first song you wrote?

Yes. I mean, there were a few when I was playing the flute originally but the first proper ones were as soon as I started playing the guitar at 12 years old. There’s a riff from one of those songs that I still want to rework now into a new song. That’d be pretty cool, collaborating with my 12-year-old self.

You’re a multi-instrumentalist, coming across as an electronic singer/songwriter.  Do you write song ideas on varying instruments, depending on your mood or inspiration at the time?

Absolutely. Whatever is feeling good at the time or even just a musical chairs approach where I jump from instruments when I feel like it. That’s a good approach. My brain has a different approach with these instruments and the language on each has small differences that can help unlock good ideas.

Guitar and piano seem more prominent on older tracks, while the new songs on ‘twentyseven’ seem to have more electronic layers.  Were the electronic elements added in the studio or written while the songs were in their early stages?

Actually, the twentyseven LP was one of those bodies of work that I approached with production and song writing simultaneously evolving, and I love how it influenced the outcome. It was like composing with an orchestra in front of you instead of just you and a piano and then arranging the parts out for orchestra later. I was searching for sounds and sometimes they were from guitars and sometimes they weren’t. The next body of work will probably be completely different.

Have you done much co-writing? If so, who with and how did you find the process?

Over the past 2 years I have done a whole lot of co-writing but on twentyseven I wrote every track by myself, except for two songs that producers worked with me on (circles and yours).

I love co-writing and have explored that process a lot for other people’s work that I have been involved with (Woodes, Tia Gostelow, and more) and have a lot of new work in the bag that I did in that way. It honestly is the best experience, as I feel inspired by all the amazing artists I get to be in the room with and learn from.

We met through the Push Songs mentorship program.  Does being around other song writers have a positive influence?

Huge influence. I spent so much time doing things on my own in the past few years (until recently) and that was an important phase of exploration. It helped me find myself a bit.
But now my improvement has been very rapid (especially since making this album actually) and I am very happy with that. It’s been an amazing period of growth post the LP and I’m pretty excited about some of the new work coming out.

Do you have any writing routines? For example, a coffee before sitting down with an instrument, or find that things flow better late at night?

I don’t drink coffee, which most musicians find incredibly odd for some reason. I don’t have any routines really, except to do it a lot. Just write as much as I can and explore a lot outside of pre song writing sessions too. I am definitely a morning person when it comes to anything also. Though most rules (especially that one) are often broken and great results come from it.

You have featured other singers on your songs.  Do you write with these artists in mind? For example Ngaiire on the song My Own Mystery, or Airling on the song April.

They’ve all been different! April was a song that Hannah (Airling) just really loved and connected to and wanted to sing on. It was a special part of our connection and friendship that I still feel when I hear it.

My Own Mystery was written but I wanted to add the other perspective and my partner Tacey asked if Ngaiire could play the role of her. I love Ngaiire so it was such an amazing honour to have her on a track I wrote.

I think future features etc will end up being more collaborative than those ones, but it’s just different every time.

Do you have any recurring writing struggles? Some examples other writers have mentioned are finishing choruses, writing lyrics or coming up with song titles.

I certainly have in the past, but I’ve really enjoyed overcoming those deficiencies. It’s very rewarding.

I used to struggle with lyrics a lot because they were so vague and I felt like I got lucky every time they all lined up. It paralysed me when I needed to edit them or improve them. But then I started just writing 10 verses when I needed 2 and it opened it up a bit.

Then I used to struggle with finishing off songs but slowly overcame that through doing sessions where time deadlines pushed me.

Actually, a lot of the answers I find are in collaboration. We think we need to do everything ourselves but getting someone in who’s good at your weaknesses is really smart.  And you often learn from them so you rely on it less later, which seems counter-intuitive but, essentially we are all each other’s teachers so it’s like working alongside someone who can show you how to do things.

How is it working with another producer, being a producer yourself?  I would imagine it would be heaps of fun creatively.

When the session is good it is awesome. I seem to only have really good sessions mostly. You hear horror stories but I haven’t had a lot of those so from my perspective it’s all good. If you bring the right attitude and are prepared to work hard and not have an ego that prevents good team work then you should have a very rewarding experience.

How much is improvised on the spot when recording?

It’s hard to answer this question. It depends on the context. Some bands will have rehearsed a lot to record something and other times you are recording as you write so there are imperfections everywhere, but you may grow attached to them and keep them.

I studied music improvisation at VCA for my uni course so improvisation is a big part of my studio process and I love it. It’s a very, very easy way to bring human-ness to music created on computers where we can take shortcuts so easily (like not re-recording multiple choruses etc etc)

Who did you look up to in the Australian music scene growing up?

Big Scary. And I still do. That little musical family is such an inspiring hub of giving and supportive artists. They are all amazing but they aren’t arrogant at all, and they’re all very thoughtful and constructive with their words and thoughts. Big love to them.

If you could choose anyone to write a song with, who would it be and why?

This is such a hard question! It’d be pretty cool to write with one of those huge writers like Julia Michaels or someone like that. I’d love to see her process, that’d be really cool.

How do you know when a song is finished? How do you finish a song?

I used to think it never was! But not as much anymore. I think when there is a full fleshed form that makes sense and all the sections are written. And then production-wise it can go pretty deep but there kind of comes a point where you hit your wall and that’s where I like to get someone (Andrei Eremin for me) to come in and help getting all the production cleaned up and editing it basically. Then it gets mixed and mastered and you usually (ok, sometimes not true) don’t go back from there. There are always exceptions.

Supported by Tyne-James Organ (full tour) and Essie Holt (all shows except Adelaide, Fremantle and Castlemaine).